As you’re reading profiles on dating sites, more often than not, you’ll see that what women are looking for, even above looks in a man, is a sense of humor.

If you doubt that humor is really what women want, think of all the funny leading men in Hollywood who don’t have the star power good looks, yet women flock to their movies. It’s because they’re funny and funny can beat out attractiveness more often than not. 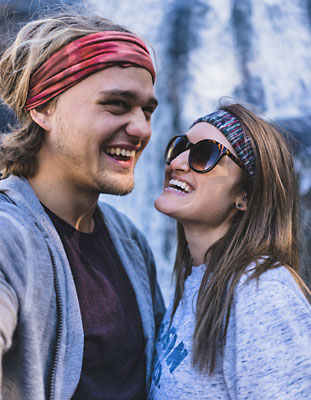 When something goes wrong on a date, he’s not always looking at the negative side, throwing his hands up or worse, having a temper tantrum. A man with a good sense of humor recognizes that life doesn’t always go according to plan and he can roll with that.

Because he’s adaptable, this draws women to him. Women are attracted more by personality and behavior than they are the physical appearance.

A man with a sense of humor is by far more confident than a man who has little sense of humor. Women recognize this confidence and are drawn to it.

A woman enjoys being around a man who can laugh at the absurdities of life. Women like this because they know that when a relationship hits a rough patch, a man with sense of humor will always find the positive in it. He’ll find something to laugh about – even in the toughest of times. He’ll find a way to help make her laugh.

Men with a sense of humor can keep a relationship fresh and lighthearted.

These kinds of men are usually excited about life and always have something that they’re looking forward to. Women like the idea of having a man who doesn’t get bogged down by life and all of the trying things that can go on. When a crisis hits, a man with a sense of humor has better coping skills than a man who doesn’t.

A sense of humor helps a man look for a way around a situation and if he can’t find it, then he’ll find a way to lighten the burden.

Studies have shown that people with a sense of humor are highly intelligent.

They’re often witty as well as being real in a world filled with posers. Women have had enough of men pretending to be something that they’re not.

A man at ease with himself and others around him.

He doesn’t have to pretend to be someone else in order to feel comfortable. This sense of being at ease translates into confidence. He can be himself whether it’s just the two of them or whether they’re in a social situation.

Plus, women know that a man who has a good sense of humor is never boring.

He’ll be fun to hang with alone or at a party.

Women long for a man that they can be themselves around.

Women know they can laugh with their man, while he can be serious, he won’t take things so seriously that he makes life a drag.

Women want men with a sense of humor because not only do they view these men as more fun, but also as having more long term potential.

This is because men with a sense of humor have a higher playfulness level than men who are more serious. They’re more likely to not be as stressed as men who never really learned to laugh at themselves or at life.

He is not only witty, but he pays more attention to the world around him – and that includes the woman in his life. Women pick up on this and it’s more important to them than physical appearance. This is why you’ll often see a beautiful woman out with a guy who looks like there’s no way he should be with her.

Love is out there. We can help you find it. Join eharmony today!

Studies have shown that couples who know how to laugh together are happier and more fulfilled than couples who don’t. So if you want to get the girl, be sure and develop your sense of humor.